December 31st. Sitting at my mom’s house, surrounded by family, food, a nice big puzzle getting started on the table, and Ryan Seacrest on the TV announcing a lot of my favorite performers ringing in the new year with song. And I’m having a small anxiety attack.

2015 was a big year for me. I had a baby. I started offering songwriting as a service and was overwhelmed with the response. We raised over  $2,600 for the new album. I finished recording the album. I performed and worked with some really amazing people. I have come such a long way since this day last year. So why does my chest feel like it’s going to cave in?

I put so much pressure on myself to succeed. The funny thing about my success is that I define it. Once I hit a milestone, I re-define success for myself. It somehow always seems out of reach. There are still so many things in front of me. Things I’m excited to try, places I want to visit, goals I want to achieve. And if I get too much in my head about it, it becomes a never-ending “to-do list”. My progress will never end. But, I don’t want it to.

So, today is about celebrating all that I accomplished last year. Today is about allowing myself to feel joy. I’m happy right now. There is no pressure to work faster than I can right now. I will create and share as I feel compelled to.

The funny thing about putting pressure on myself to do something is that, that usually makes it very difficult for me to finish the thing I’d like to do.

One thing in particular that I’m excited about for 2016: the progress of the new album.
So I made a video for you. Happy New Year! I love you!

Any of you who have attempted to get small children to take a nap (Perhaps so that YOU can take a nap?) understand that it is not an easy task. One of my favorite ways to get my kids to sleep is to sing to them. I have a few favorite go-to songs from my childhood that I really love. Most of these songs come from old cartoons or kid shows that I watched growing up. (Let’s see if you can guess what movie the song I sing in the video is from.)

Sometimes, no matter how long you sing, your babies will just have no desire to sleep. I just love the little grins and coos though. They make up for the fact that I probably won’t be getting any sleep anytime soon.  Enjoy!

Happy SPRING!! I love this time of year. It’s finally starting to warm up and I’m feeling all kinds of spring fever. (Lucky for me I get to visit San Diego this month, but more on that later.)
Remember how I was asked to write a song for the local radio station last year?  Well, this year I was asked to be part of it again!

The winner had entered her parent’s love story. They met at a very young age and have been inseparable ever since. Unfortunately, the husband is very ill and they think that this will have been their last Valentine’s Day. Needless to say, it was an emotional experience.

You can listen to the song here:

and check out the behind-the-scenes video here:
It was a pleasure writing this song for this beautiful couple. I was so excited about it that I’m offering it as a free download here: https://www.ashleyludlow.com/free-track/

I hope you had a wonderful Easter weekend. I got to spend time with family. The kids dyed eggs and went on an egg hunt. We spent most of the weekend at my parent’s house just enjoying each others’s company. We also got to watch General Conference which is always a big event with our family. We had a ham and potato dinner, and of course, lots of sweets from the Easter Bunny. My favorite is the Reeses Peanut Butter Eggs.

How did you spend your Easter weekend? What is your favorite easter candy? Leave me a comment and let me know.

I’ll be heading to San Diego at the end of the month for some continuing music education. I’m hoping to be a better musician, a better speaker, and a better songwriter. It’s not exactly a “vacation” per se, however, I couldn’t me more excited!

Are you headed on vacation this spring? Or did you already go? If so, where to?

Don’t forget how amazing you are!

So, last year, I was approached by the DJ at a local radio station to write a love song for a Valentine’s Day contest. I thought it was a great idea and so I was all in! They chose a winner from the entries and I had the chance to write this song for Danielle’s grandparents who had been married for 72 years. Have a listen:

It was such an amazing experience. My inner 12-year-old was so giddy. I was on the RADIO!

For my reaction and a little behind the scenes, click here.

Well, this year I was asked to do it again, making this the 2nd annual Valentine’s Day Love Song Contest!

I’m so excited to share it with you! Stay tuned…

America’s Got Talent – They just don’t recognize it…

A little over a week ago, I was on Facebook, when I ran across a fascinating post by Lindsey Stirling.

(If you don’t know who Lindsey is, go check out her YouTube channel. She is an extremely talented violinist.)

She posted this picture: 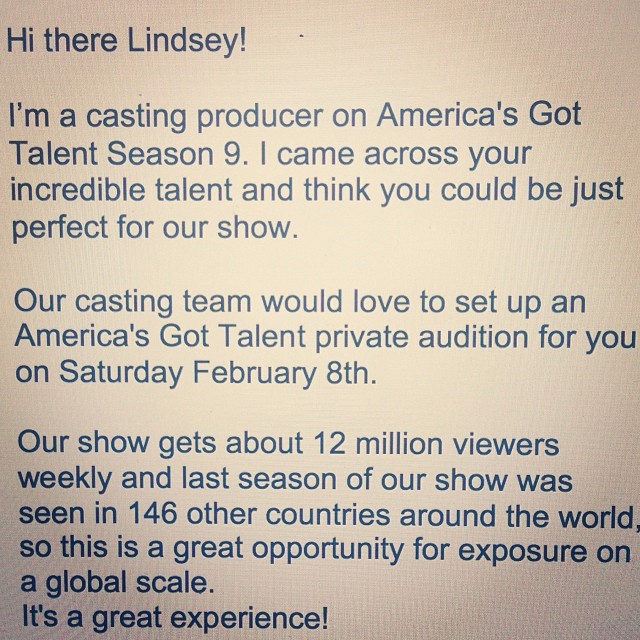 This is an email she received from America’s Got Talent this month.

And, here’s the reason why it’s hilarious:

Lindsey’s caption on the picture said,

“Hahaha. I’m dying laughing right now. Just found this in my email.
For those who don’t know, I was on Americas got talent in 2010 and
I got torn apart by the judges. @PiersMorgan told me on live tv that
I sounded like “drowned rats being strangled.”
Haha, now that I have a following, I guess they changed their mind;P
You guys did more for me than Americas got talent ever could have. #ironic

This is such an amazing story, because instead of letting this feedback keep her from doing what she wanted to do, she went ahead and followed her dreams anyway. She’s now been on her own headlining international tour of sold out shows.

This gives me hope for my dreams. If I can work hard and continue to make music, I can make music my career and be successful.
I want to say, THANK YOU for being here, for reading my blog, and for watching my videos and listening to my music. This wouldn’t be happening without you.

So, my husband and I have 3 kids, including a 1 year old baby, a 4 year old with a sensory disorder, and the daughter I mentioned, who is 5. This particular night was a difficult one. My son was running all over the theater before the recital started. My baby (maybe some of you moms can relate) would only be happy if I was holding him and standing up. No sitting allowed. So when the show started, we knew we had a rough half-hour or so ahead of us.
I have to point out that we were not the only parents there with other young children. This was a young dance recital. There were other babies crying, and there were other young girls and boys who were playing on tablets to keep them occupied during the dancing.
Now, let me back up a little. Before the show started –as I was holding my moody 1-year-old and trying to catch my runaway son– one of the ushers, a small older woman, stopped me and said, “He is not allowed to run around like that in here.” Now, I don’t know what you’re thinking… but I was just ready to laugh and cry all at the same time. I looked her straight in the eye and said, “If you’d like to help me keep him under control and in one place, I’d gladly accept the help! Cause I sure can’t keep him in one place!”
The woman looked like she didn’t know what to say. And I walked down the aisle to attempt to catch up with my son.
Okay, back to when the recital started. We finally got my older son to sit somewhat still with the help of a tablet. We had turned the brightness settings as low as they go, and as I mentioned before, we were not the only ones.For some reason, another older woman usher approached us during the recital and told us to turn off the tablet. Mortified, I sank into my chair as my husband told the woman our son has special needs and that the tablet is far better than the alternative.
As I sat there, feeling completely helpless, embarrassed, and inadequate as a mother, I began to think of ways I could have done things differently. Should I have gotten a babysitter, and told my son that he just couldn’t see his sister dance today? (You should have seen his face when he saw her on stage! He lit up with bright eyes and a big smile. He even joined in shouting encouraging words at her from where he was sitting!) Should I have snuck in treats for my baby in a theater that said, “No Food or Drink” on the door? I thought, “All I want is for my family to come to this dance recital together, watch the show, and ENJOY.”I thought, “I AM DOING MY BEST!”
Then it hit me.
We are all doing our best.
The old women ushers were doing their best at what they were supposed to be doing.
My son was doing his best with what he knows.
The woman behind me who was talking about her personal life a little too loudly, was doing her best.
I don’t think there are many people who intentionally try to cause inconvenience or pain to another person.
And so, I’m learning to be more observant. To be more understanding.
The woman in the room who has 4 kids climbing all over her, making noise,
The grumpy old man who has to have his 2 cents,
The young punk who has an attitude problem and is always right,
The wild child who is running around causing mischief,
The person in your life who is avoiding you,
The person in your life who won’t leave you alone,
The person in your life who drives you crazy,
ALL of these people, are doing their best.

So next time you’re feeling inconvenienced by the actions of another person, put yourself in their shoes. Imagine what that might feel like. Maybe you’ve even made similar choices before!Decide today that you are going to be more compassionate and understanding.
I can’t wait to share the song with you!
~Ashley Ludlow
Don’t forget to pre-order your copy of the new album! www.ashleyludlow.com
If you enjoyed this, please share. :)
« Older Entries
Next Entries » 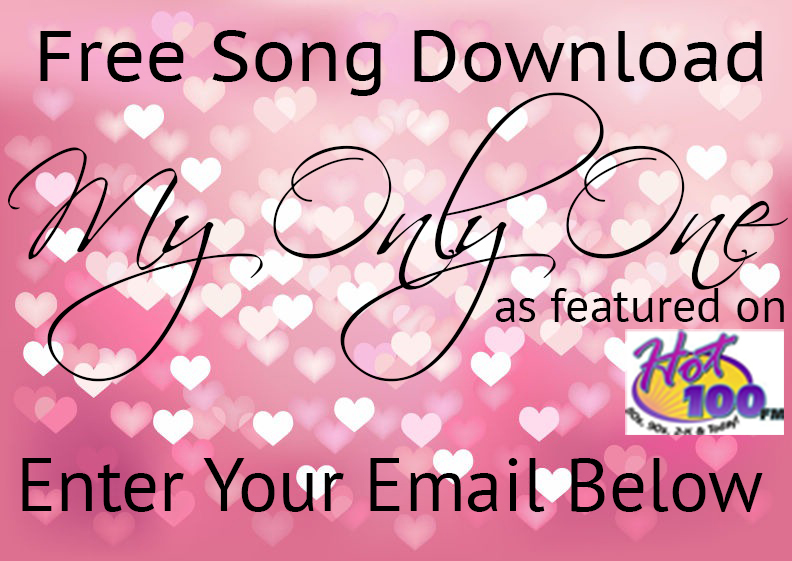